Though I shuttered my consulting practice in 2015, I thought it might still be useful to showcase aÂ few of the highest-profile projects on which IÂ was mostÂ recentlyÂ working.

In 2013, I joined the National New Play Network as the Project Director overseeing the development of the New Play Exchange, a national database of new plays supported by a coalition of non-profit organizations working to support the new play sector in the American theater. I'm leading a year-and-a-half long technology project from RFP development through a beta launch in 2013 to a full public launch by the end of that year. Our intent: to provide radically-smart, disruptive new tools to the professionals in our industry.

I recently joined an impressive interdisciplinary team at Ford's Theatre working to develop Remembering Lincoln, an interactive experience designed to help communities all across the country commemorate the 150th anniversary of the assassination of President Abraham Lincoln. In collaboration with the in-house team and a diverse array of subject matter experts, I defined the the front-end requirements for the platform. The ambitious goal: engage visitors with critical history. The significance: immeasurable. 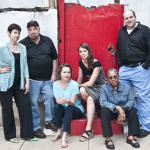 As one of six founding members of The Welders, a DC-based playwrights' collective, I've been tasked with building out the organization's communications strategy and then implementing that strategy as well. Introducing a new brand from scratch meant designing and building a flexible web presence; establishing and growing Twitter and Facebook followings; art directing photo shoots; and editing significant copy. The result: a robust platform, significant media attention, and a rapidly-growing fan base.